The Have A Jolly Little Christmas Quiltalong was my delight during the summer.  I love Sew Fresh designs generally, and this was so much fun to create! 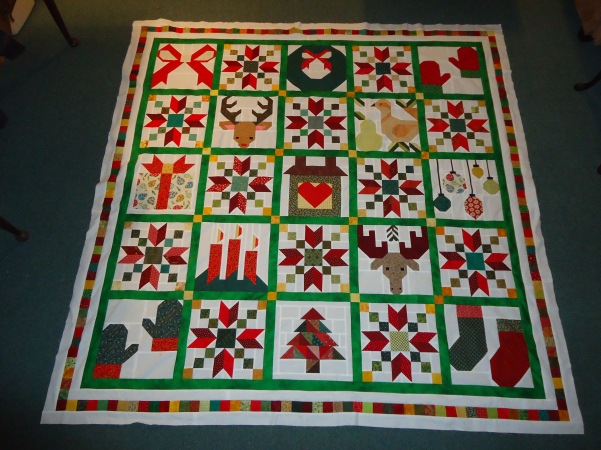 I left out some blocks, added a few, and generally rearranged things, and this is, at long last, my version.

The finished top is 78″ x 78″.  As soon as it is quilted, it will go live at my parents’ house.  Hopefully in time for Christmas this year. They support and enable my quilting ambitions.  At this rate they will soon have TWO quilts for every bed…

Currently I have two projects in progress that have alternating blocks.

First is the Sew Splendid Sampler quilt.  I stitched along, sort of.  Mostly I just did the pieced blocks, but I also added a few ideas of my own.  I knew I wanted a quilt at least throw size and the only way seemed to be to use alternating blocks.  So, the block I shared recently is my alternating idea.  This is how it looks laid out with the pieced blocks.

The whole thing is a little  different for me.  I found myself with an abundance of 1930s reproduction fabrics and thought to use them on this quilt since it was all an experiment.  I don’t hate it, but I am not as confident in this range.

Next is the Jolly Christmas Quiltalong.  Again, I have mostly stitched along, but also added some outside blocks.  Again, I want a larger quilt, so I used her Poinsettia Block, slightly modified, as an alternating motif.  I plan to use sashing (color not determined) and gold cornerstones to extend the Irish chain effect.

I like this one more, but I am concerned that the alternating blocks are taking center stage because of their bold design.

So many of my finishes lately have been quilts I wasn’t quite sure of.  That isn’t a bad thing, though.  Hopefully it means I am still learning and growing as a quilter. If you never try something that makes you at least a little uncomfortable, you aren’t going anywhere new.

Things I Write About